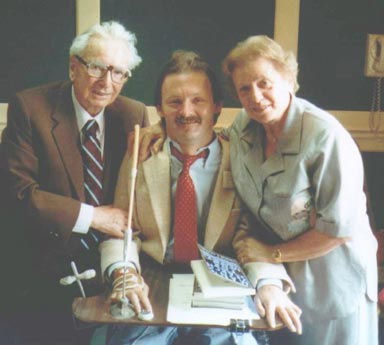 began his affiliation with logotherapy in 1978 as a college freshman reading Man's Search for Meaning. At that time he was recovering from an accident which left him paralyzed from the chest down. After writing Viktor Frankl a letter, they soon became friends and, eventually, colleagues. Frankl frequently spoke of Jerry Long's life as "a living testimony to logotherapy lived and the defiant power of the human spirit".

Jerry Long continued his formal education and earned his Doctorate in Clinical Psychology in 1990. He was the recipient of numerous awards and honors including the Michael Whiddon Award, Honorary Member of the Austrian Medical Society for Psychotherapy, the Viktor Frankl International Institute of Logotherapy "Medallion of Responsibility", several university teaching excellence awards and, in 1993, was recognized on a national scale in the United States as he was named "Teacher of the Year" by The National Institute of Staff and Organizational Development. In 2001 Jerry Long received the "Viktor Frankl Award of the City of Vienna."

He was an active national and international public speaker, practicing clinician and frequent presenter at international World Congresses of Logotherapy. In the last years he resided in the Dallas/Fort Worth metroplex where he had an active practice and several Adjunct Professorships at local universities.

In 1998 Jerry Long wrote a contribution to a journal issue commemorating the recently deceased Viktor Frankl. Here is a passage from his text which may serve as an apt memorial to him.

"Once, after speaking to a large audience, I was asked if I ever felt sad because I could no longer walk. I replied, "Professor Frankl can hardly see, I cannot walk at all, and many of you can hardly cope with life. What is crucial to remember is this - We don't need just our eyes, just our legs, or just our minds. All we need are the wings of our souls and together we can fly." - Jerry L. Long