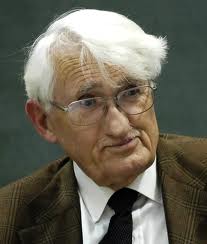 born June 18, 1929, is a German sociologist and philosopher in the tradition of critical theory and pragmatism. He is perhaps b est known for his theory on the concepts of 'communicative rationality' and the 'public sphere'. His work focuses on the foundations of social theory and episte mology, the analysis of advanced capitalistic societies and democracy, the rule of law in a critical social-evolutionary context, and contemporary politics, par ticularly German politics. Habermas's theoretical system is devoted to revealing the possibility of reason, emancipation, and rational-critical communication la tent in modern institutions and in the human capacity to deliberate and pursue r ational interests. Habermas is known for his work on the concept of modernity, p articularly with respect to the discussions of "rationalization" originally set forth by Max Weber. While influenced by American pragmatism, action theory, and even poststructuralism, many of the central tenets of Habermas' thought remain b roadly Marxist in nature. Global polls identified him as one of the leading inte llectuals of the present.